VOL members at one of their meetings.

In the fall of 2020, Jaruwat Maendl had a vision: to create a place on campus where students can improve their public speaking skills in a safe and nurturing environment. This project was inspired by Toastmasters International, a chapter of the speech club of which Maendl was a member in high school, which dramatically transformed his public speaking skills. Upon entering the Buccino Leadership Institute in the fall of 2019, Maendl noticed the lack of teaching public speaking in the Institute’s curriculum. Since public speaking skills and the ability to communicate effectively are essential for a well-rounded leader, Maendl decided to take this issue into his own hands. During his second year in spring 2021, he had the perfect opportunity to put his vision into action with the institute’s IDT projects. During the first two years of the leadership program, the institute implemented interdisciplinary team projects (IDT) in the spring program. Each IDT team consists of at least one student from each cohort within the institute and offers students the opportunity to work with a diverse group of individuals on a project to improve the institute or Seton Hall as a whole. . Maendl first pitched his idea of ​​improving the public speaking program to the entire sophomore class in the fall of 2020. After his argument, his peers elected him the official CEO of IDT. This position allowed her to draft a team of her peers to help her set up a public speaking initiative on campus. After a semester of work, the Voice of Leadership (VOL) was presented to all leadership students. The purpose of this group: to provide students with time to receive constructive feedback for prepared and impromptu speeches. The associate deans and students were excited about the team’s proposal and VOL was chosen by Dr Price, the director of the Institute, to continue the following academic year. As a result, the first VOL meeting took place on September 20, 2021.

The unique structure of the VOL meetings allows students to practice giving practical and impromptu speeches in front of a group of their peers. During each meeting, members volunteer to fill specific roles that help run the meeting. Inspired by the pirate mascot of Seton Hall, the roles of FLIGHT are nautical themed and include Captain, First Mate, Quartermaster, Sailors, Deckhands, Boy Scout, Bo’s’n; and the Navigator. Just as each of these roles is the key to a successful pirate journey, they are essential to a successful FLIGHT meeting.

Each FLIGHT meeting begins with a welcome message from the Captain, who is in charge of running the meeting. The Captain then introduces each crew member and their role for the evening. The captain designates roles that facilitate the meeting, such as the first mate, who leads the feedback session. Throughout the meeting, the Scout keeps track of filler words (like “um”), the Bo’s’n makes sure each speaker uses the word of the day, and the Navigator keeps track of the time. The captain then hands it to the two sailors, both of whom deliver pre-prepared speeches that address the designated topic of the night. After the speeches, the sailors evaluate the speakers and give them their opinion. When that part is over, the captain hands the meeting over to the Quartermaster, who oversees the impromptu speech game for the meeting that everyone can attend. After that, the meeting ends with final comments from the captain and anyone else present at the meeting. Attendees then voted on who had the best speech and the best commentary to offer, with prizes going to the best speakers and evaluators of the evening.

Of all the activities that take place at a VOL meeting, my favorite is the improvised speech games that appeal to the personality and immense creativity of the VOL members. One of the recent impromptu speech games on October 25 th put leadership students in a scary spirit. Given three Halloween-themed words, the members of VOL were tasked with creating a spooky story incorporating each of the words. Crazy, funny and scary stories were told as the members of VOL practiced their impromptu speaking skills and expanded their vocabulary. So much laughter filled the 132 Jubilee Hall that one would think that the FLIGHT was a party rather than a public speaking initiative! Skeptical that public speaking can be fun, so attend our next FLIGHT meeting! 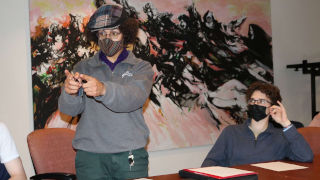 Jaruwat Maendl shares his comments with one of the members of VOL.

In a short time on campus, the VOL made great strides in improving the public speaking skills of various leadership students from all college years. Students who struggled to deliver a one-minute speech at the start of the semester now enthusiastically volunteer to be sailors and speak at meetings. FLIGHT director and creator Jaruwat Maendl is incredibly proud of what FLIGHT has become. “Is The Voice of Leadership the public speaking program I initially envisioned two years ago? No, not even close. The FLIGHT is better than I imagined, and that It’s all because of my amazing team. It was an honor to work with them and watch them bring this idea to life and make it their own. “

Part of that team is VOL secretary Olivia Ransbottom, a junior who was drafted by Maendl in the initial IDT project. Ransbottom commented on the success of the FLIGHT, stating “While I was cautiously optimistic about the project, I could never predict its success! The initiative, although complex and difficult to conceive, has successfully contributed to improving the public speaking skills of students across the Institute. She notes that while she is always afraid to speak in public herself, seeing how other students have grown up has given her new self-confidence. “Instead of being scared, I now look forward to the continued growth that VOL has to offer myself and any other leadership student like me!”

Jaruwat Maendl, President; Olivia Ransbottom, secretary; Cassandra Mirarchi, in charge of strategic communication; and John LaFrance, meeting coordinator, are all very excited about the future of FLIGHT. We have a dedicated group of students who attend every meeting and continue to grow exponentially during our bi-weekly meetings. In addition, the FLIGHT is delighted to announce that next semester all Seton Hall students will be able to look forward to FLIGHT workshops. These workshops will feature guest speakers and cover vital public speaking topics, including how to write and deliver informative and persuasive speeches. VOL members are passionate about their content, their agenda, and the initiative’s ability to create better public speakers. If you want to be the best leader you can be, VOL encourages you to contact one of its members and attend their bi-weekly meetings at 8 pm in Jubilee Room 132. Speak up!

Until the end of the pandemic, prices ...